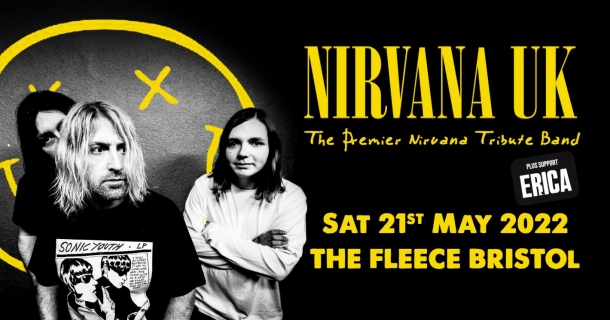 Nirvana UK + Erica At The Fleece

Nirvana UK + Erica Are On At The Fleece May 21st

Nirvana UK are a Touring Nirvana tribute band that are based in the west midlands and are formed of die-hard Nirvana fans who love nothing more than recreating Nirvana’s live music their look for other fans. The band strives to be as close to the real deal as possible. Including the same clothes, instruments, effect boxes, drums and preamps that the band used, to ensure they re-create the distinctive Nirvana sound

ERICA is an awesome, dynamic, unsigned and original three-piece band hailing from sleepy Winchcombe, a small town in Gloucestershire.
Having now enjoyed success twice in national battle of the band’s competitions, Erica has been streamed live to over 2 million viewers on Italian television station RAI in April 2017 and opened V Fest in Chelmsford in 2015