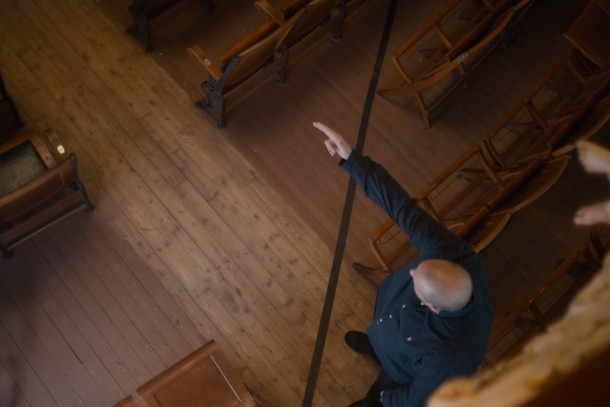 Lawrence Abu Hamdan is a Private Ear: a detective of sounds and their traces. His new film commission, 45th Parallel, focuses on the Haskell Free Library and Opera House, a unique municipal site that straddles the jurisdictions of Canada and the United States.

Built by the Haskell family in 1904, the site was originally constructed to provide education and cultural enrichment to the border communities located on the 45th parallel in Rock Island, Quebec and Derby Line, Vermont. A thick black line demarcating the border runs through the entire building, dividing the library collections and creating the only cross-border theatre in the world, where the audience and actors are in different countries.

Filmed on location, 45th Parallel activates this unique site’s legal and symbolic potential. The work is structured as a monologue in four acts, performed by acclaimed film director Mahdi Fleifel. The story centres on Hernández vs Mesa, a judicial case covering the fatal, cross-border shooting of an unarmed fifteen-year-old Mexican national in 2010 by a US Border Patrol agent.

In 2019, the US Supreme Court ruled in favour of Mesa—the border agent—claiming that, as the firearm was discharged on US soil and the murder of Hernández took place in Mexico, the guard could not be prosecuted in the US. Supreme Court judges were fearful that Mesa’s bullet could implicate drone strikes in Yemen, Syria, Afghanistan, Pakistan, Iraq, Somalia and Libya. The work temporarily suspends us in a parallel world where the one vote that stood between justice for Hernández and the thousands like him killed across the border, went the other way.

Each act is demarcated by a scenographic change in the hand-painted backdrop on the Opera House stage. First, we see the original backdrop of a picturesque Venice canal, followed by two newly commissioned scenes that are part of the installation. One references a 1920 painting by British artist Richard Carline (1898–1980) of an aerial view of Damascus and its surrounding landscape, and the other the concrete culvert in El Paso-Juárez where the 2010 cross-border shooting took place.

Together the film and installation render the Haskell Free Library and Opera House as a grey zone, continually recasting the border as at once powerful yet superficial, absurd yet lethal.