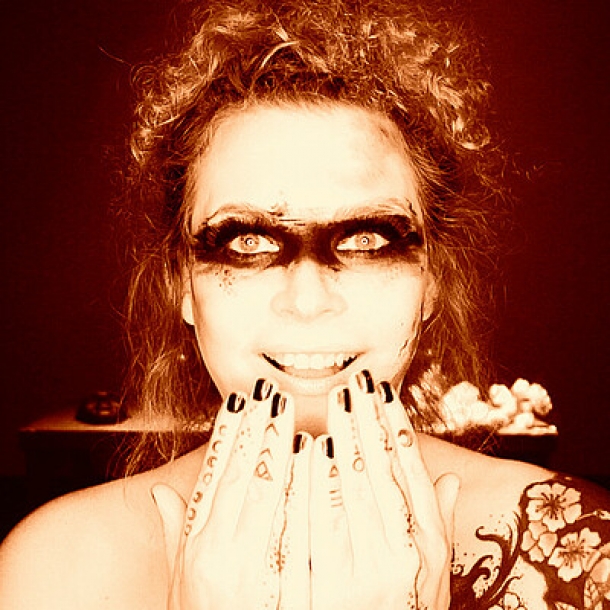 The Flowers of Evil Tour At The Crofters Rights

The Flowers of Evil tour is coming to 15 different cities in June including Bristol on 1st June.
It's a co-headline tour with Healthy Junkies and Witch of The East.
A bit more about the bands :
Healthy Junkies - Mixing Punk Rock with Grunge, Psychedelic Rock, New Wave, Garage, Glam and Goth Rock, add a soupçon of theatre and you have Healthy Junkies. Glamorous yet rebel lead punkster Nina Courson moved to London after she ran away from her home in Paris to pursue her own rock n roll rite of passage..
Destiny awaited when she found guitarist Phil-Honey-Jones in a Soho gig called PUNK in 2009. The two went on their way seeking solace in the world of music. Naming the band Healthy Junkies, reflecting the mental health epidemic currently spreading like wildfire through the core of western society. Nina and Phil arrived at this name as a reaction/rebellion to the numbing and dumbing down of nations with the use of so many pharmaceutical meds such as Prozac and other addictive drugs. The name has now taken on an even broader meaning with ‘Health’ being so high on the world agenda!
They have been played on the likes of BBC Radio London introducing by Gary Crowley, BBC 6 Fresh on the net with Tom Robinson ( 3 times ), BBC Jersey, Amazing Radio, Planet Rock, Total Rock, Lava TV, BT Sport and Blank TV. as well as many Internet Radio stations on a regular basis. They were part of a music documentary called The United Kingdom of pop, a 32 part series which tells the story of Rock’n’roll from its beginnings to now alongside legends such as DJ Don Letts and Lynval Golding from the Specials. It was presented and shown on ARTE TV which is one of the most important channels in France and Germany with millions of viewers. They have also appeared and featured in numerous magazines such as Vive le Rock,Louder than War, Big Cheese Magazine, Big take over magazine, Devolution Magazine, Punk Globe, Eighth Day, Punk Lounge. Safety Pin Magazine as well as a whole host of online magazines and blogs.
The band have recently released their 5 th studio album entitled ‘Forever on the road part 1. The reviews so far are exceeding any preconceived expectation. 10 out of 10 being the latest from Powerplay magazine. This was made during lockdown along with 3 videos of singles off the album. The third ‘Tricky Situation' is the latest single and video to be unleashed into the unsuspecting lockdown world.

Witch of the east - Here in Nottingham, we take pride in a local music scene that has a thirst for smashing the status quo – just take a look at the likes of celtic punks Ferocious Dog or underground bassline hero Darkzy to get a taste of what we mean. Valiantly carrying the torch against the aforementioned ‘quo’ is grunge and dark-pop trio Witch of the East – a project of intense emotional vulnerability explored through an indulgence of thriller-based imagery within an expanding catalogue of music videos. With a new single within arm’s reach, a new LP just beyond the horizon and a past seemingly as enigmatic as their future, getting in touch with the band’s founder and frontwoman was a given. So, armed with an arsenal of caffeine, we got chatting to Aeris Houlihan, where the conversation jumped from prison stories to reactions to the ongoing global crisis. We even managed to fit some music chat in there as well.
Having served in the armed forces, played for a Sunday League Football Team, been incarcerated for a couple of months in Eastern Europe and lived as a transgender woman in a world that seems to be taking steps back in its support for trans rights, Aeris has enough stories to tell without delving into her musical antics. Be that as it may, it is her elaborate past that gives Aeris her brutally honest lyricism and the band its deep, brooding sound. As such, the pandemic is yet another source of creativity which Aeris has put to good use: “I've written plenty of songs, and I've also done pre-production on a lot too, so I've been super busy. It means I'm way ahead of schedule for when I go in to do the album. I've even done a few music videos and the album's not even recorded fully yet!”
With a writing style heavily influenced by her volatile surroundings, predicting the next step in Witch of the East’s discography is no trivial task – almost as insurmountable as following up the band’s debut LP Queen of Insecurities with the same vigour. Aeris explains, “I think people are going to be surprised because there's a bit of a Nina Simone vibe in terms of aiming into the soul. It's going to be more vulnerable than the last record too. I would also say it's less heavy and there’s a bit more of an electronic side of it as well.”
The new album’s expected lyrical poignance stems from a genuinely life-shaping experience. Following a minor altercation with someone at a New Year’s Eve party in Eastern Europe (having moved there whilst in her original band Chambers), Aeris was hardly expecting to be handcuffed on a plane and thrown into a cell a year later: “I wasn’t taking it seriously, to be honest. I thought my friend would be coming to get me in the morning and they’d just let me out”.