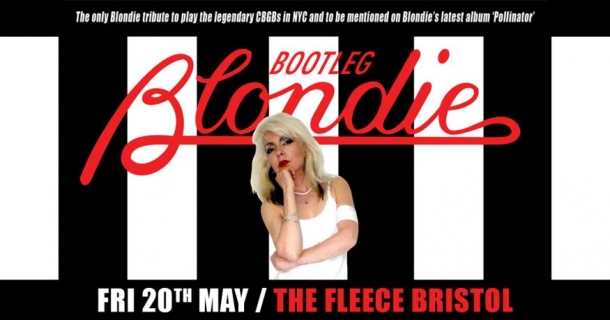 Bootleg Blondie At The Fleece

Bootleg Blondie Are On At The Fleece May 20th

BOOTLEG BLONDIE is the official Debbie Harry & Blondie tribute band, the only Blondie tribute to play the legendary CBGBs in New York City and to have the honour to be mentioned on Blondie’s 11th studio album ‘Pollinator’.

Lead vocalist Debbie Harris has appeared on two shows for BBC1 when she was picked out of 15,000 applicants to represent Debbie Harry on ‘Even Better Than The Real Thing’ hosted by Paddy McGuinness. The shows attracted an audience of 10 million viewers!

Debbie Harris and Bootleg Blondie have played the Isle Of Wight Festival, the 100 Club, the Hammersmith Palais and the Electric Ballroom in London, Eric’s in Liverpool and have opened up for amongst others The Undertones, Slade, Bad Manners, The Beat, Heaven 17, Toyah, Hazel O’Connor, Visage, Bananarama, Altered Images, Howard Jones, Chas and Dave, Tony Hadley and can be seen at all the major venues and festivals around the UK and Europe.