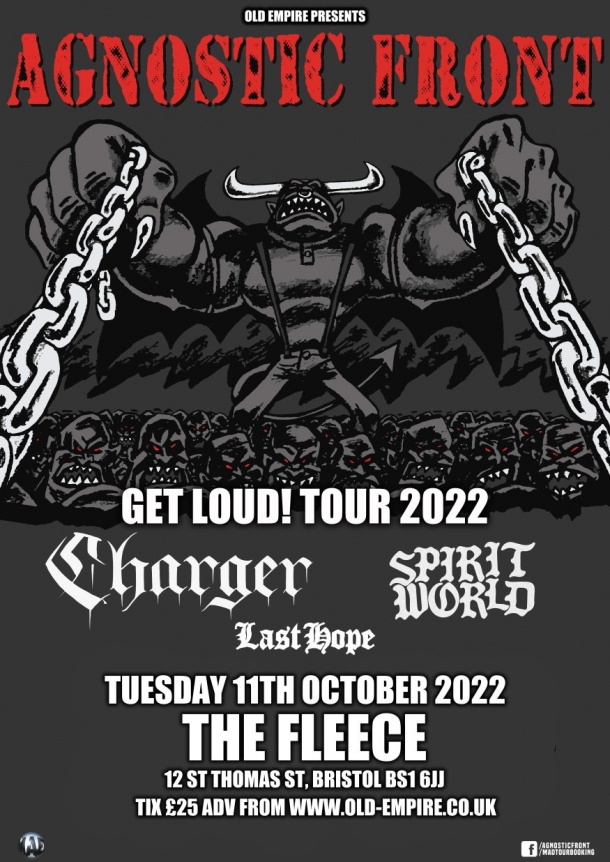 Agnostic Front At The Fleece

The New York hardcore scene that arose in the early ’80s was an intense but accurate reflection of a city in crisis, and no band better typified the sound and fury of the time than Agnostic Front. Taking the speed and simplicity of early N.Y.C. punk acts like the Ramones, the Dead Boys, and the Dictators, stripping the tunes to their frameworks, and upping the speed, impact, and overall rage, Agnostic Front provided the ideal and inevitable soundtrack for a city mired in debt and crime, with hundreds of underprivileged kids in Manhattan and its outlying boroughs forming bands to rail against the everyday trials, dangers, and prejudices of urban existence. The elemental sound of early Agnostic Front classics like 1984’s Victim in Pain and 1986’s Cause for Alarm were massively influential in the American hardcore scene, as well as providing a key stepping-stone toward speed and thrash metal. 1998’s Something’s Gotta Give, their first album for punk powerhouse Epitaph Records, was a more refined effort but showed that their rage and muscle were still there. And just as Agnostic Front influenced metal, metal would influence Agnostic Front; later efforts like 2007’s Warriors and 2011’s My Life My Way sounded beefier, full of the stuttering drums and shards of guitar that typified the harder edges of the metal scene.