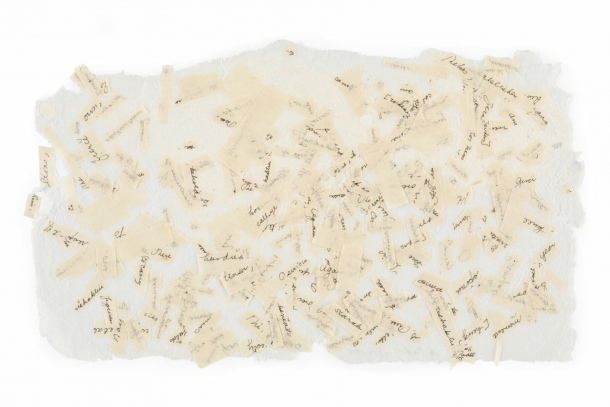 A major exhibition by artist Howardena Pindell which takes its title from an essay written by the artist in the 1980s, in which she calls for ‘a new language’ for people of colour working in the arts – one which ‘empowers us and does not cause us to participate in our own disenfranchisement’. The exhibition follows Pindell’s career over the last fifty years, from early abstract pieces through to more overtly political works that tackle subjects including slavery, violence against Black and indigenous people, the AIDS pandemic, and the climate crisis.

A New Language is organised by the Fruitmarket, Edinburgh in collaboration with Kettle’s Yard, Cambridge and Spike Island, Bristol

Howardena Pindell (b.1943, Philadelphia, PA) works across painting and film. She is an activist, critic and teacher who spent over a decade working at the Museum of Modern Art, New York, as one of the institution’s first Black curators. Largely known for her monumentally scaled abstract canvases, Pindell has expanded the definition of what abstract painting can be through her inclusion of glitter, paper circles made from punched holes, and the layering of mixed media and scent. She rose to prominence through the late 1970s and early 1980s and had a major solo exhibition at the Studio Museum, Harlem in 1986.

Throughout her career Pindell has exhibited extensively. Notable solo and group exhibitions include: the Museum of Contemporary Art Chicago; Whitney Museum of American Art; PS1, New York; Museum of Contemporary Art, Los Angeles; Contemporary Arts Museum, Houston; Museum Brandhorst, Munich. In 2020, an exhibition of new work at The Shed, New York articulated Pindell’s response to racism and white supremacy against the backdrop of the Black Lives Matter movement and growing international outrage at anti-Black state violence in the US and elsewhere, in the wake of the murder of George Floyd.