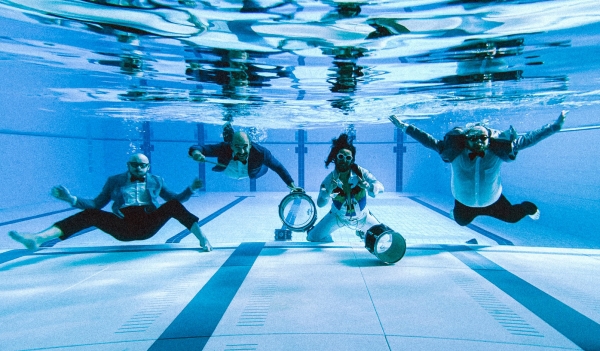 Yep, you read that right. Catch the live combo you never knew you needed at The Marble Factory.

Elvana will be tearing through Nirvana's iconic back catalogue live at The Marble Factory in September, splicing up the hits with the King's finest moments as they pay homage to two of the all-time great rock acts.

Having last played in Bristol in 2019, the band have gone from strength to strength in their short lifespan, garnering a reputation as one of the best - and most unique - tribute bands in the UK right now.

Tickets for Elvana: Unplugged at The Marble Factory on Wednesday 14 September are on sale now and can be found here.

Since forming in the mid-2010s, Elvana have played at major venues up and down the country, including sell-out shows at Shepherds Bush Empire, Nottingham's Rock City and Manchester Albert Hall.

Their upcoming Bristol show falls slap bang in the middle of a busy live schedule, which will also see Elvana play in Nottingham, Dublin, Belfast, Birmingham, Newcastle, Salford, Milton Keynes and Glasgow between now and September.

How good is Glastonbury? You don’t even need to be in the tent. The mighty Elvana last Glasto #Glasto #Glastonbury #Elvana pic.twitter.com/GXJNpPFgEd

In an interview with Rock at Night, the band shed some light on their curious beginning as Elvana, saying that the whole thing "pretty much started as a joke that snowballed into something we never imagined.

"We’ve been in ‘original’ bands for years," they continue, "but had all but retired to concentrate on the rat race, day jobs and family life. Then a friend of ours asked us to perform some cover songs at their fancy dress party."

Elvana is the embodiment of a joke that got out of hand, providing an intoxicating mix of a silly foundation and a glorious amount of top tunes.

Tickets for Elvana: Unplugged at The Marble Factory on Wednesday 14 September can be found here.

For more information, or to find out what else is coming up at Motion and The Marble Factory in 2022, head to the venue's website.